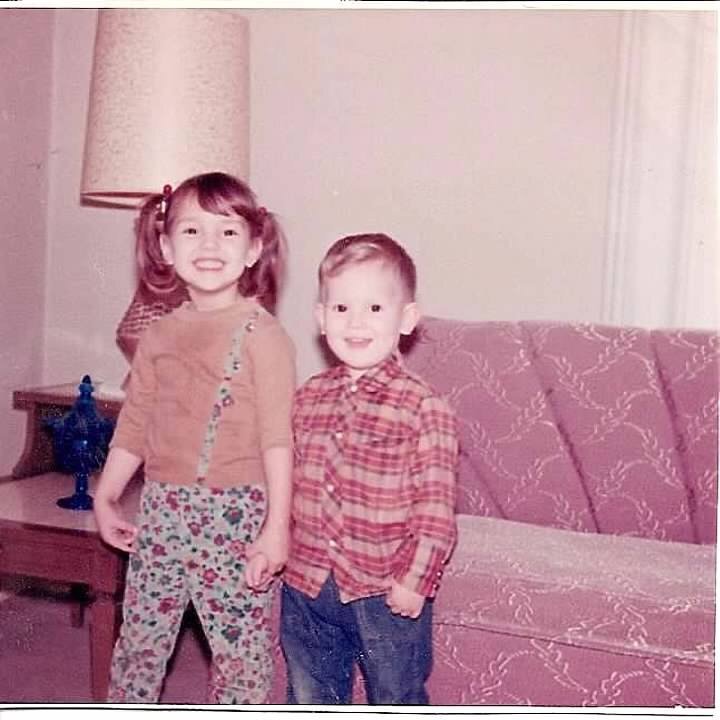 I was looking through pictures the other day and ran across several from when my brother, Brian, and I were little.  The pictures brought back great memories.

Brian and I were just 15 months apart so we learned early on to share and play together.  I remember that he loved to play with his Matchbox ® cars, while I enjoyed my Barbie ® dolls.  Brian would want me to play cars with him and we would take time setting up roads and a little city then it would be time to separate the cars.  We would take turns picking a car, truck, motorcycle, or whatever we wanted from the case. Literally by the time we set up roads, the city and divided the cars, it would be hours later and Brian would be excited to finally be able to “play”.  Fun for him would be the driving on the roads and making up scenarios for uses of the different vehicles. I would “play” for a short time, get bored and quit. Brian would get so mad. “Really? We just spent all this time setting everything up and you quit.” he would say.  The fun for me was building everything and dividing the cars.

When it was my turn to choose the game, Brian would agree to play dolls.  We would spend hours building make-believe houses, dividing the dolls and clothes and then start to “play” and shortly after, I was done. Again, I enjoyed the organization, building and division of property.  Wow, even writing this I can see why Brian would get so mad at me. lol

We had such different personalities, likes and dislikes which became more evident as we grew up.  I was very studious, organized, and enjoyed school. Brian liked hunting, shop class only, and tended to be sloppy.  Even though we were very different, we enjoyed each other’s company (most of the time) and board games became an even playing ground and fun for us.

Eventually in high school, I moved to live with our father and he stayed with our mother.  I remember missing him very much during the couple of years that we were apart. We saw each other on rare holidays or visitation weekends.

Brian moved in with us when I was a junior in high school.  We were two school years apart and didn’t share any of the same friend circles.  As with many siblings, we would fight over the silliest things but we knew that we always loved each other.  I would help him with homework occasionally, play games outside in the evenings, like HORSE with the basketball, and take long bike rides together in the summer.

When I graduated school, I went into the US Air Force and lived in California, so far away from southern Indiana.  Brian and I rarely talked during that first year I was away. Phone calls were expensive then and writing wasn’t his thing.  But I remember receiving a letter from him out of the blue and he told me how much he missed me. Little did I know then that a month or so later he would die in a tractor accident and I would never see my brother again.

A few years after Brian’s death I sat and wondered where he would have been?  He had enlisted in the Air Force and was awaiting a departure date. Would we have had a close relationship?  Assigned to bases close enough to see each other often? Married? Children? During that time I was married and had given birth to Jarod and Brandi.  As I would sit and rock them as babies, I would sometimes cry at the thought that Brian never got the chance to experience being a father.

In my first children’s book, I Love and Like You!, I share the lesson that we don’t always have to like another person, their actions or words, but we should always love them.  I learned that lesson early with regards to my brother. We could so get on each other’s nerves, but oh how I wish he was alive today.  I would happily take the arguments and irritation as well as the fun and the love.

I miss you, Brian and you will always be in my heart!