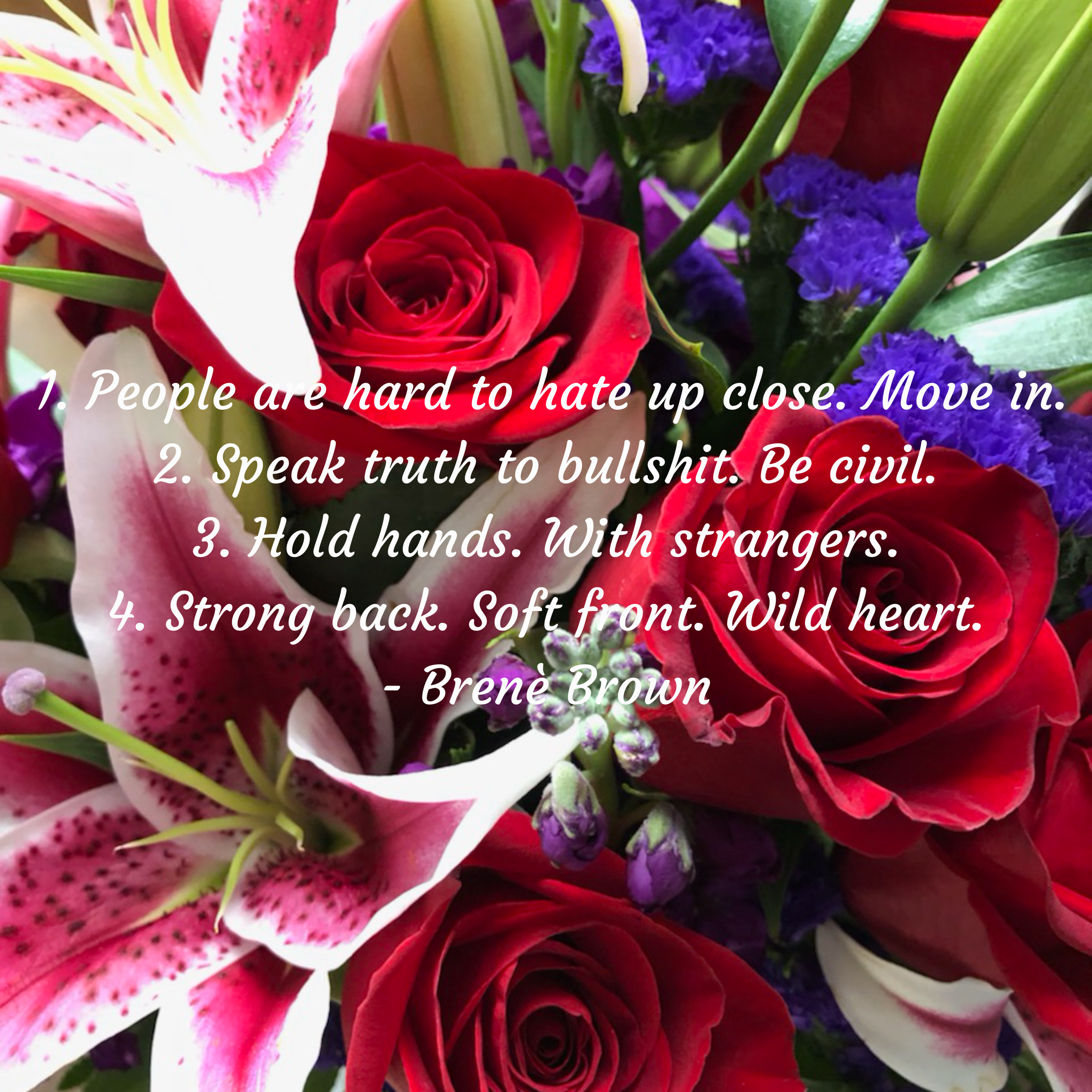 I recently read Brene’ Brown’s book Braving the Wilderness.  Her work is changing so many lives, me included.  She lists four elements that we should incorporate into our lives.  One being “Hold Hands. With Strangers.”  This element reminded me of a speech I delivered in 2016 to my fellow Toastmasters International®. I would like to share this true story with you. 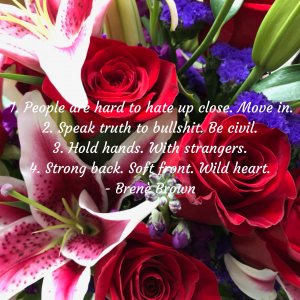 INSPIRE – I’m sure that word resonates differently for everyone.  It means: to make someone want to do something; to cause someone to have a feeling or emotion; or to cause something to happen or be created.  I want to share an experience I had back in December that describes that word to me.

Since last summer, I began commuting to downtown Chicago two days a week with my new corporate role.  I typically take the Metra train on Wednesdays and Thursdays.  The morning of Wednesday, December 10th started as a typical work commute day.

I boarded the 7:10 train and as I moved through the car I started to sit in an open seat to my right.  Just as I was about to sit, I felt a draw to keep moving and sit with a woman on my left just a few rows up.  I sat down, placed my ticket on the holder and settled in for my ride into the city.

The woman beside me was on the phone and she seemed very angry.  I tried not to eaves drop on her conversation but I am sitting right next to her in the seat on the train.  Kinda hard not to.  She was saying things like:

– You better talk to your Dad about that money

– I can’t believe you are throwing your life away

By those comments I determined she was speaking to a college age son who was dropping out.  My heart went out to her because I know from personal experience, she wasn’t alone.

Their phone call must have been disconnected because she began crying and threw her phone into her purse.  The tissues came out and she was trying very hard not to openly cry harder.  Her son must have started texting her because she reached for the phone and began typing in between wiping her eyes.

I asked myself, “Do I share my story? What if she gets angry with me for listening?” My gut instinct was to try to help her, console her.  But I continued to “play” with my phone, probably scrolling through Facebook or something.

The phone rang and she answered it.  She was quiet for a bit while her son must have been talking.  All I heard next was “I can’t do this anymore.  I have to go to work.” And she hung up and again threw the phone in her purse.  Now she was crying harder.

I mustered enough courage and touched her arm and leaned over to her so those around us couldn’t hear.  I said, “I didn’t mean to overhear but if it helps at all, my son got up for over 2 months every day and pretending to go to his college classes before he confessed that he dropped out.”  Then I was just quiet for a second.  She smiled and said, “OMG, that sounds like my son.” We chatted for a minute or two about what was going on with her son, how angry she was with him and frustrated because she felt like he was really messing up his life.  I said that my son went through a similar time and I felt the same way she is now.  “But,” I said, “there is hope.  My son is now in the Air Force in security forces and loving his work and I couldn’t be prouder.  He is really focused and volunteering for additional training.”

She took out her phone and showed me the text her son just sent. “Mom, I don’t want to disappoint you.  I just don’t know what I want to do.”  As tears rolled down her face again, I said, “He doesn’t want to disappoint you.  He is young and confused.  All he needs to know right now is that you love him.  Just tell him how much you love him and you will work through this with him.”

She said, “Wow, did you pick the right seat this morning on the train?”  I told her that I really struggled with whether to say anything to her for fear I would be interfering.  Her reply was so heartfelt, “Always interfere.  You really helped me this morning.”

By this point we were already finishing our conversation as we stepped off the train and were walking forward. As I approached the stairs to the lower level of the train station, I told her that I truly hoped her day improved further.  She thanked me again as I descended the stairs and she walked toward the station.

I smiled to myself as I relived the conversation in my mind.  The interaction had a profound effect on me and I was so grateful that I found the strength to interrupt the troubled lady on the train.

What this lady wouldn’t know is how this conversation helped to put me in the Christmas spirit.  I was struggling with finding the energy or will to decorate my house.  My husband and I would be traveling to our son’s house for Christmas and I couldn’t find a reason to be festive at home.  The train ride experience gave me the needed uplift a few days later to decorate a tree and get ready for Christmas at home.

The following Wednesday, the train was pulling into Ogilvie station and I gathered my computer bag and stood to get into the line to get off the train.  As I walked to the line and stopped, I looked over to my left.  It was the same woman from the train from last week.  She said to me, “There you are!”  I said hello and asked how she was doing, and commented that she looked so much happier than the last time I saw her.  She told me that when she got home that night, she told her husband about meeting me on the train and that I was her “angel”.  I smiled and said, “Aw, thank you so much.”  She said her son was enrolling into a tech school now and her and her husband had a very positive and production conversation at home with him last week.  She said, “I can’t thank you enough for your words and kindness that morning.” I wished her a very Merry Christmas and was happy to help.  She wished me a Merry Christmas as well.

I felt great joy in my heart and was so thankful that I ran into her again on the train.

I want to encourage each of you to trust your instincts and listen to your heart.  Find strength to go out of your comfort zone and never underestimate the power to inspire someone!